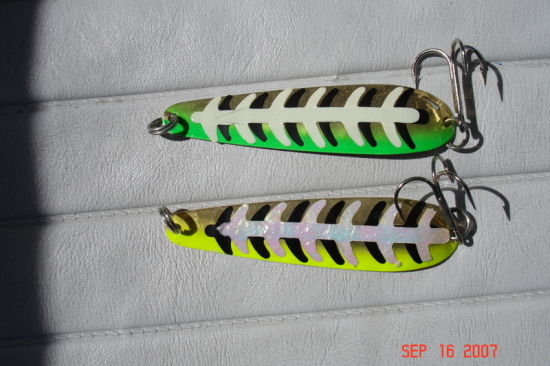 Every spring, the tackle counters of local sport shops are filled with attractive displays of the latest lures in a myriad of colors designed to capture the attention of eager anglers, to say nothing of eager fish. Most tackle boxes are bulging with lures of every hue, and each fishing trip becomes a study of what color baits will entice the fish today. However, certain principles of vision and the behavior of light as it penetrates the water can make lure selection more scientific.

Most fish can see in color. As in people, the retina of a fish's eye contains two types of cells, rods and cones. Cones are used for day vision and are the cells used to see colors. Rods are used for night vision and cannot distinguish colors, although they can judge light intensity. The eyes of most freshwater fish contain both rods and cones, though day feeders tend to have more cones, and night feeders more rods. In theory, then, day feeders like bass, trout, and salmon are more sensitive to color than night feeders like walleyes.

Studies have shown that rainbow trout and Pacific salmon have color vision similar to that of humans. They can distinguish complementary colors and up to 24 spectral hues. Other studies have shown that brown trout are capable of sharply focusing on near and far objects at the same time and that they can clearly see different colors at different distances. But light behaves differently in water than it does in air. The various colors of light travel at different wavelengths. The longest wavelengths are the reds, followed by oranges, yellows, greens, blues, indigos, and violets.

When light travels through water, some of its energy is absorbed, and the longest wavelengths are the ones absorbed first. Thus, the warmer colors fade out and gradually appear black as light penetrates the water column. Red light is almost completely absorbed within the first 15-20 feet. Orange penetrates to 30-40 feet, and yellow to 60-70 feet, while green and blue remain visible for as deep as the light penetrates. The total amount of light also decreases with depth. At 50 feet, a yellow lure will still appear yellow, but will not appear as bright as it did at 20 feet.

While red may be visible down to 15 feet in the clear water of open Lake Michigan, it may disappear within six inches of the surface in the turbid Fox River. At depths where it is nearly dark, a white or silver lure would show up better than a blue or green lure against a blue-green background of water. Products that are designed to reflect any light that strikes them, like Prism-lite, also make lures more visible. Commercial fishermen have experimented with this principle in reverse, using it to make their nets less visible. Nets for use in very deep water have been dyed blue or green so they would blend into the background color of the water.

Perch fishermen in southern Green Bay have experimented with dying their nets red, presumably because red fades out first in these shallow turbid waters. Total light intensity is also important. On a cloudy day, colors will not penetrate as deep as they will on a sunny day. At dusk, as light intensity falls, reds are the first color to go, followed by orange, yellow, green, and blue. As total light intensity decreases, the fish's eye switches to vision with rods, and the fish is no longer able to distinguish colors. After dark, fishermen should choose between a light lure or dark one. At dawn, as light intensity increases and fish switch back to cone vision, the order is reversed, and blues, greens, yellows, oranges, and reds appear.

At early dawn, some anglers are successful with a red J-lug near the surface. To fish striking from below, it shows up as a dark lure against the lightening sky. As the day gets lighter, red no longer works well, and anglers must experiment with more visible colors. Studies on salmon have shown that their feeding behavior depends on whether they are seeing with rods or cones. During the day, salmon use cones to give them information on the hues and shades of moving prey. When prey are first located, they are stalked and eaten head first. From dusk to dark, rod vision takes over.

Schools of prey fish break up and salmon assume a position below their prey to see them in contrast against the water surface, watch them move for a few moments, and then snap them up one by one. Ultimately, the appeal of the lure to the fish is most important. Fish must strike the lure either to eat it or attack it. While fish may locate the general area of the bait by smell or sound, most of the fish in the Great Lakes make their final attack by sight. Fish scents and noisemakers can draw fish to the area of the lure, but before it can strike, the fish must also be able to see it. This is why lure visibility and color are important to successful fishing.