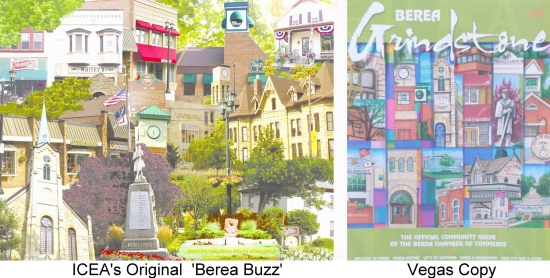 The Berea Chamber of Commerce have chosen a design by Cleveland artist Hector Vega for the cover of their GRINDSTONE Magazine.

Mr Jakupca said: "OK, you are required to do some research before you release a Magazine cover". The GRINDSTONE Cover is nearly an exact duplicate of Denise Andrews and my collaboration, which came out a couple of years ago.

"Both covers feature a collage of Berea landmarks. The exception is the Vega's omits in his cover the famous Worlds Childrens Peace Monument (WCPM).  "BEREA BUZZ"  was created directly in conjunction with the WCPM and its connection to ICEAlity to the   International Art Scene, so before people run off about how cool the new Vegas cover is, show them the complete yours/ours "BEREA BUZZ" photo from BEREA FIRST."

"Naturally, when something we have slaved over and invested time and resourses (in Berea), fought for recognition over (in Berea), is so easily undone by jobbing out commercially, we feel a bit exploited. And if imitation is the highest form of flattery it is also the cheapest, but we are going to be the bigger man and just say we are proud as an American Cultural Ambassador to inspire other artists with My Original Work".

This claim comes just days after the Associated Press has determined that a image used in the Obama 'Hope' poster that was used everywhere during last year's presidential campaign by Shepard Fairey , is actually an AP photo and that its use required permission.

Related news is that the Irish band U2 was found copying the photo of their newly released No Line on the Horizon Album from Taylor Deupree, a musician from New York, who used the same image for his 2006 CD Specification Fifteen.

For more information on artist rights pertaining to business poaching and the Foundation Syndicate operations in north east ohio click on: INTERNECINE MATRIX