Rigging The Dodger/Fly And The Thumper Rod

Not to many years ago a technique was found that really produces fish. But is it really new? The dodger/fly combo was used many years ago on the Great Lakes. Then we switched to dodger/squid and then we ran spoons and J-plugs and then cut bait hit home. Well now there's the dodger/Fly. It's a very simple technique that works great. In this article I will discuss the way one would rig the dodger/Fly and the use of the Thumper Rod which will also double as your speed indicator at the ball. 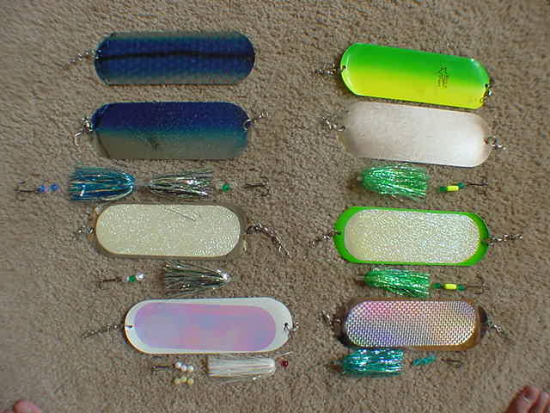 I know I've said one must have a FishHawk, but I'm here to tell you that for this setup, you don't need the speed indicator for the ball, the Thumper Rod will tell you what's really going on down there. Let's talk about colors. I'm going to keep it simple. These colors work under all conditions and should be all you need to catch fish. For dodgers, Luhr Jensens: silver glo, chrome prism tape, white/pearl tape, faded chartreuse/chartreuse tape and kelly green. As for flys,(these are all Howie colors)glitter green, glitter green/black/silver, pearl, aqua, powder blue and flat green.(you can use any of your favorite dodgers or fly's of any manufacture or color) You'll rig them using 50lb Seaguar fluorocarbon leader of 22" from the nose of the fly to the knot where you connect it to the dodger. Leaders can be shorter or longer if the fish prefer, you'll have to figure that one out by trial and error. Generally the 22" one works well. 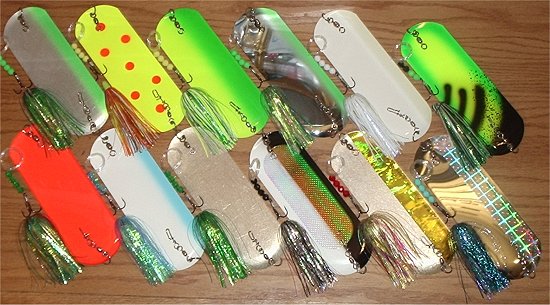 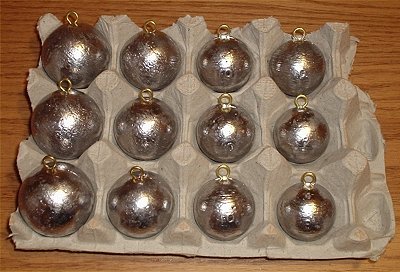 Again we set them to run different depths. From the Dipsey we used a clear 12 inch snubber, then a 6-10ft leader of 40lb Seaguar and then the dodger and fly. Same 22" leader as above. Next and most important is the thumper rod. The thumper rod is a wire line rod(same as my Dipsey rod) that we put a 10-16oz weight on to get it to the desired depth. We rig this by attaching the weight to the snap then a snubber. from the snubber we run an 8ft (40lb) leader then the dodger and fly. Again were using the 22" leader behind the dodger. Then we let it out behind the boat to the desired depth. 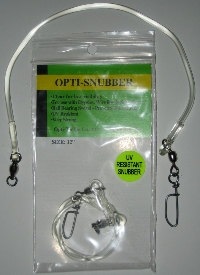 You'll have to do your homework to figure out how much line you have to let out to get it where you want it. I can tell you this(only as an example), you need 190ft of line with a 12oz weight to get 80ft down. Next we put out 1 of these rods on each side of the boat. That way you can see what's going on on each side. Now here's the most important part of the setup. Take a thumper rod and let it out a few feet next to the boat. At a slow speed watch the dodger and note what it's doing and what the rod tip is doing. Now speed up and do the same thing. Speed up again to about 2.7-2.9mph., you should see the dodger go side to side and then roll occasionally. This is the speed you'll want when everything is set so pay attention to what the rod tip is doing. After 3.0mph you'll notice the dodger starts to roll all the time, watch the rod tip for this because you'll be using that as a speed gauge also. The rod tips will tell you if you're going to fast or slow and when fish hit they will tell you what speed they like. Just duplicate that speed and you'll be all set. Sometimes they'll hit when it's rolling and sometimes they won't. This is a high speed presentation so if you're blowing by other boats don't worry about it. You'll be covering a lot of water and finding the aggressive fish.

Trolling in big s's and turning around will increase the odds of hookups as it changes the speeds at the dodgers. You may actually see that 1 thumper rod is rolling while the other isn't when you make a turn. If a fish hits in the turn, make a note of it and try to duplicate the speed for the other rods. When using this presentation spoons and J-plugs can be used as stackers or in and around the dodgers. You can not use cutbait with the dodger /fly combo as they don't run effectively at the same speeds. I can almost positively say that if you aren't catching fish on the dodgers you are going to slow. These dodger/fly combo catch everything too.

Browns, Lakers, Salmon and even Steelhead. It's a very easy and effective presentation once you learn how to do it. If you decide to run the dodger/fly combo, be dedicated to it. Run 5 or 6 of them at a time, not 1 or 2. Run them at the high speeds and see what happens. I think you'll be impressed. I know I was. Good luck to all.