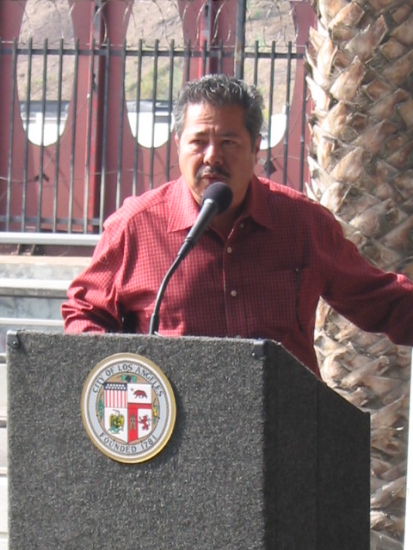 Founder of Anahuak Youth Soccer Association, Non – profit org.community support in the fight  against industrial development at TaylorYard. By mobilizing the 1,400 Anahuak soccer players, ranging in age from four to seventeen years, he ensured that the concerns of those living in the neighborhoods  around Taylor Yard would be heard. Further, as the only community-based Macías  and Anahuak let the state’s elected officials know that the needs of young people in  urban LA could not be ignored.Macías, who emigrated from  Mexico  over thirty years ago,began promoting youth soccer in 1994, after a group of  neighborhood kids asked him, as a local business owner, to donate $30 a week to help  them pay for referees and  other expenses. He agreed on one condition: that the  youths come by each week to tell him the results of the games. Macías eventually took over coaching the team: “They kept  losing,” he says, “week after week. They were good  players but they needed a  coach. They needed somebody to push them to do  things right, to show them how to be winners.”  As one team grew into two and then three, the Anahuak  organization was born. Macías realized that he’d been presented with a real opportunity:  “I wanted to give these  kids an alternative to drugs and gangs and crime. I could  use soccer as a hook to keep  children off of the streets, children whose families can’t  afford to  pay for league fees  and equipment.” Macías joined the Coalition for  a State Park at Taylor Yard  because he recognized it as similar opportunity: “In the end, it had nothing to do with  soccer fields,” he says. “These parks, they’re an  investment, an investment in our community and in our young people. We can teach  our children about nature, to  respect nature, to love open spaces, fresh air, and trees.”  “The people,” he continues, “are excited—the real people, who never believed it was  possible, the gardeners and  mechanics. They feel very happy. ‘It’s a dream,’ they say.  ‘We’re going to have a park right here. I don’t believe it.’”